What better way to start a new year than updating your website?
;-)

Modified Images for the Tissot Indicatrix

Starting with the projections I added today (see below), I will use modified images for the Tissot indicatrix. I changed the colours in order to achieve better contrasts; the graticule (which is helpful in evaluating distortions) is more emphasized; and I removed the artifacts on the coastlines: 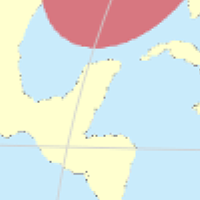 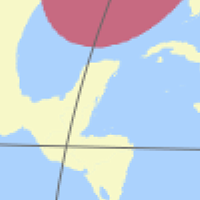 However, I will use these images only for new projections, so the existing Tissot images will not be replaced. At least not in the foreseeable future
Update Jan 10, 2022: And four years later, I finally took the time – the old Tissot renderings have finally been replaced by the new ones for all projections!

Moreover, all cylindrical equal-area projections differ in one regard only, namely the selected standard parallel. I find it quite unnecessary to assign eight individual names if, in the end, it is the same projection method, changing only one single parameter.
Granted: Most of these projections were created at a time when drawing a new map with a modified standard parallel was much more complicated than typing in an arbitrary value between 0 and 90, clicking a button and waiting for the projection software to finish rendering the map. So, maybe the different names are justified, even if it may seem a bit awkward from today’s point of view.

But on the other hand, map-projections.net was created specifically to compare similar projections and to be able to discover their sometimes very slight differences. So what am I talking around? – Here are the newly added, cylindrical equal-area projections: Balthasart, Smyth, Tobler’s world in a square and Trystan-Edwards (in the variant that was corrected by John P. Snyder) [1].

While working on van der Grinten additions, I came across the arithmetic mean of van der Grinten I and the Aitoff projection, which John J. G. Savard shows at quadibloc.com since 2007.
Somehow, I liked this blend, so I made my own variant of it – in this case the weighting of the two mixed projections is shifted to 65% Aitoff and 35% van der Grinten.
Because of this mixing ratio, I named this experiment Aitoff-van-der-Grinten 65. I don’t think it’s well-suited for any purposes except decorative maps.

… and the van der Grinten IV with its two wings or cusps or whatever you like to call it (I always call them cell division projections; but only if no one is listening) has led me to the Dietrich-Kitada [3], which is an equal-area projection:

Next, I added three very unusual equal-area projections: Snyder’s tetrahedral projection, as well as two variants created by van Leeuwen/Strebe [4], the Parallel Small Circle Projection and the Vertex-oriented Great Circle Projection.
The latter one will be handled in the near future in an own blog post.
Since I always present the projections on this website in a rectangle with an aspect ratio of 1:2 and the tetrahedral projections only occupy a small part of this rectangle, I show them twice: once on the north polar aspect and once centered to the south pole.

The two van Leeuwen variants are really hard to distinguish. Hint: Look at the graticule lines, not the continents. Wouldn’t it be great if there was a website to compare such similar projections? Oh wait, there is! ;-)

Who would want a strange projection like this?
Well, actually they aren’t tetrahedral but polyhedral projections which just have been applied to a tetrahedron here. Polyhedral projections can – like e.g. the Dymaxion Map or several other variants [5] – be used to build interrupted maps having low distortions. Moreover, they look interesting and can be fun, when you use them to build papercraft pseudo-globes. [6]

And finally…
Gee, I already have so many Wagner-variants on my website!
Nevertheless, two more will be added.
When I presented my own projection experiment, Wagner-Denoyer I, I stated four goals. Quoting myself:

I wanted to create a projection that meets the following conditions:

I’m fully aware that the latter three conditions are highly subjective, e.g. what I feel is a »decent shape« might look terribly distorted to someone else. (…)

Now I was curious to see if I would succeed in creating another projection with these goals. I decided to maintain another feature of Wagner-Denoyer I, namely the slight curvature of the parallels. But this time I wanted to use Wagner’s method of Umbeziffern. In other words, generating a variation of Wagner VII/VIII.
(See: Umbeziffern – The Wagner transformation method and the WVG-7).

So I fired up the WVG-7, chose Wagner-Denoyer I as background projection image, and approached it first by setting a similar curvature of parallels, length of the pole line and extent of area inflation. As expected, this interim result was not quite what I had in mind (simply because the Wagner-Denoyer has a different graticule characteristic than a modified Wagner VII/VIII).
So I carefully adjusted the configuration parameters until I came up with a result that I liked. The outer meridians are more curved than in the Wagner-Denoyer, but still correspond to my idea of being »not too curved«.

The comparatively small area inflation of 1.14 at 60° N/S gave me the idea to try an equal-area variant. So I completely removed the area inflation and then modified the length of the pole line and the ratio of the axis again to achieve the above-mentioned goals.

… and yes, I was presumptuous enough to list myself as (co-) author of the three »new« projections (the Aitoff/v. d. Grinten mix and the two Wagner variations). But, hey, other people name projections after themselves just because they have set a specific standard parallel. So I can probably mention myself when I’ve tinkered a bit on the configuration parameters. ;-)

Is there anything left to say?
Oh yes: Happy New Year!