In the beginning of this year, I added the Györffy E projection to my website. Preparing that blogpost, I read Györffy’s paper[1] where I stumbled across the mentioning of projections that “were created (…) by suitable renumbering of Aitoff and ordinary polyconic”. Now, I’ve written about the Umbeziffern[2] (renumbering) quite a lot, but I had never heard or read that this procedure had been applied to the American Polyconic. So I investigated and found out that in 1971, Nedjelko Frančula introduced a bunch of projections[3] obtained by Umbeziffern from various parent projections.

And here they are.
Fourteen projections, minimizing distortions by application of the Airy and the Airy-Kavrayskiy criterion.

A few words in advance

Before we start looking at the projections, let me get a few things off my chest…

After this opening speech we finally can look at the projections.

The projections Frančula I to Frančula V were optimized for minimal distortion according to the Airy criterion (EA); lower values indicate lower distortion and are better. I to IV have equally spaced parallels (along the central meridian) and belong to the type of aphylactic (compromise) projections, No. V is equal-area.

While pseudocylindric projections I and II do have low distortion values, they look (in my opinion) quite unpleasing to the eye because of the stretch in north-south-direction. I much prefer the lenticular projections III and IV, they also show better EA values. Since they are somewhat similar at first glance, here’s the link to compare them directly.

Frančula V shows the highest distortions values but has the often-useful property of equivalence. By the way, my own experiment I called Wagner BCW-E is somewhat similar (but I promise that I knew nothing about Frančula’s projections when I came up with it).

The projections VI to IX were developed using the Airy criterion, too. They are based on parent projection, we’ve already seen on Frančula I to III.
How’s that?
Well, the first variants have a standard parallel (and thus, the area of lowest distortions) around 60° North/South. This not only explains their “stretched” appearance but also leads – despite their low overall distortion – to an unfavorable distribution of distortions.

In order to fix this, Frančula set the standard parallel for the projections VI and VII to 40° North/South and adjusted the length of the pole line in order to reach minimum values of EA in this configuration. The result indeed looks better to me, and probably fits better to the intended usage as general-references maps.

So far, so good. On the other hand, the variations of Francula III, i.e. Frančula VIII and IX, make me frown. The idea was the same, namely to enhance the distribution of distortions. But…
Firstly, they look less attractive to me than No. III. Well, that’s an objective, purely aethetic judgement, so scratch that.

Secondly, I’m not so sure whether the distribution of distortions is actually better. It’s true, the areal distortions in regards of the nominal(!) scale of the map seem more balanced, but I think the distribution of angular distortions is even a bit worse. But more importantly I don’t understand why the Frančula VIII is listed at all, when IX looks almost identical but has a lower EA value. I just would have discarded the VIII…
Well, I don’t know the reason, and if it’s mentioned in the paper, I managed to read over it so far. However:
Compare Frančula VIII and IX – you’ve got to look closely to see the differences.
To inspect the changes applied to the first rendition:
Compare Frančula III and IX.

Before me move on to the next section, here’s a table of all the Frančula projection we’ve had so far and a few other well-known projections, sorted by their EA value, best to worst. All values were copied from Frančula’s paper.

The final five projections are derived from the same parents as before but were optimized for low distortion values according to the Airy-Kavrayskiy criterion. In my opinion, the pseudocylindricals (X and XI) look much better than their Airy criterion counterparts. It’s harder for me to decide on the lenticulars: They look different of course but both the Airy and the Airy-Kavrayskiy variants are quite pleasant.

Although derived from different parent projections, Frančula XII and XIII look somewhat similar.
Compare them directly to spot the differences.
And again, the equal-area projection (XIV) has the highest distortion values but they still are quite good. Apart from its more pronounced North-South stretch, it’s very similar to a variant Wagner himself introduced in 1941[4] which I have labelled Wagner VII.d:
Compare Wagner VII.d and Frančula XIV.

And here’s the table of the EAK values of Frančula X to Frančula XIV, compared to the same well-known projections as before, plus Robinson and Eckert III: [5]:

A few Words on Distortions

While I was writing this blogpost, it was pointed out to me that “unlike the Airy-Kavrayskiy criterion, the Airy criterion gives different results for horizontal compression / vertical stretching than for horizontal stretching / vertical compression by the same factor”. Which is why Frančula I to V, VIII and IX all seem vertically stretched (or horizontally compressed), especially the first two. (VI and VII are exceptions here because Frančula deliberately deviated from the principle of achieving the lowest possible value of EA.)
Just mentioning that because it explains a lot.

As I’ve said in the beginning, currently I can show the usual visualization of distortions only for two projections, namely Frančula V and XIV. Since both are equivalent, there are only angular distortions. For comparison, I add the original Wagner VII.

Well, it’s always the same when you change parameters of a projection: Some areas win, others loose; and it’s hard to say which variation is the best in total (basically, that’s why people came up with such metrics as the Airy and Airy-Kavrayskiy criteria).
So I’ll just say that regarding the distribution of distortions I think all three of them are appropriate for atlas cartography.

Frančula introduced 14 projections with low distortion values. Do they fulfil the claim of being “advantageous projections for atlas cartography”?
Here’s my personal opinion:

Frančula I and II: Well, they might be useful if you really feel the need to cram a pseudocylindric projections into a tight space. I probably would not recommend them for general reference maps but maybe for one or the other thematic map. Although I have to say that in this case, I don’t see any advantages over known projections (e.g. Wagner III with corresponding standard parallels).

Frančula III and IV, VIII and IX: There’s still quite a vertical stretch, but aesthetically speaking, I like them nonetheless. I think they are suitable for atlas cartography if you want to save some space horizontally. However in the atlases I know there’s no need to save space in this direction. Therefore, I’d rather use them for thematic maps (usually displayed smaller) than for the main maps (which tend to be given a lot of space). In addition, they should also be suitable for general reference wall maps where aesthetic considerations might be more important than in an atlas.

Frančula VI and VII, X to XIII: Now we’re talking. I think they are very usable for general reference maps, both in atlases and on wall maps. I prefer the series that was optimized according to the Airy-Kavrayskiy criterion and among them, the lenticular projections.

The equal-area projections Frančula V and XIV: Both are suitable for the cause. Each has its own pros and cons, all in all I prefer No. XIV.

Résumé of the résumé: Expect for Frančula I and II, I think all projections are suitable for atlas cartography. Some more than others, in terms of the usual layout of atlases I know. But even those “others” might prove valuable in certain situations.
In any case, they are interesting alternatives to the “usual suspects” like Robinson, Winkel Tripel etc.

In the beginning I said that my attention was drawn to the Frančula projections when I read Györffy’s paper. What he actually said about them was this:

(…) some projections were created representing the poles as concave curves (bent towards the equator) by suitable renumbering of Aitoff and ordinary polyconic, with even lower EK values (…) They are ignored in the praxis of cartography because of their appearance.
(…)
The shape of the mapped Earth in the renumbered Aitoff and ordinary polyconic (…) suggest that a minimized distortion projection, representing the pole as a line, generates an outline with concave pole lines (…) The unfamiliar shape of the mapped Earth provokes the neglect of these projections.

Apparently it’s true that the Frančula projections so far have been “ignored in the praxis of cartography” (at least I don’t think that I have ever seen them anywhere), but I do not agree with the reason he’s giving for this. Their appearance merely is one of the possible reasons – but in my opinion there’s no evidence that it’s the actual reason. I think it’s just as likely that the Frančula projections rarely have been used because only very few people actually know about them.

However, if you basically like e.g. the Frančula XIII but hate the concave poles lines … just cut off the polar areas: 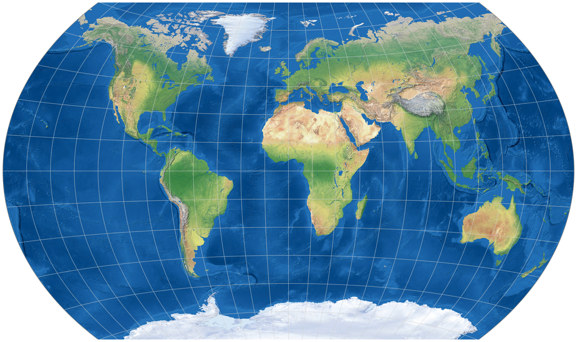 You might argue that such a truncation is a bad practice, and I tend to agree (even disregarding the fact that I like concave pole lines anyway). However I have seen worse truncations in atlases and on wall maps. And even disliking the practice, I have to admit that you don’t cut off anything that is really important to have on a general reference world map. Below are the parts that were removed – I guess that’s an acceptable loss.

Just out of curiosity, I used the Umbeziffern to create a projection that has some similarity with the Frančula XIII – more or less the same length and curvature of the pole line and the bounding meridians –, but uses the equal-area azimuthal projection as parent, with “controlled areal inflation” (as Wagner called it), which makes it a variant of Wagner VII/VIII instead of Wagner IX. I chose a configuration that results in a smaller amount of areal inflation than the Frančula XIII has.

I liked the result, but at first I wasn’t sure if I should add it to the website… but then, I realized something: Using Richard Capek’s distortion characterization Q[6] (another one of these metrics to measure overall distortion in a map projection), my experiment ended up with Q value of 88.1 – which is excellent, more accurately: Better than any of the 100 (uninterrupted) projections that were listed in Capek’s paper!

Granted, the Q for my projection was not calculated from the projections’ formula but determined by a certain way of cartometry (about which I’m going to write a long and tiresome blogpost sometime soon); and the Q has certain deficits (I’ll elaborate on this in the afforementioned blogpost); and of course there may be projections not surveyed by Capek which have an even better Q value…
… But, hey, it was a nice surprise anyway! 😊

So here it is, my… wait, what do I call it?
It’s inspired by the Frančula XIII so there should be some relation to that name.
It’s surely no approximation because the distribution of meridians and parallels differs quite a bit.
Ah, well… I’ll just call it the F13 Copycat.

This time, I use a different visualization of distortions, namely isolines of areal and maximum angular distortion, which makes it easier to compare to the images of the Frančula XIII given on page 86, Anlage 25 and 26, in Frančula’s paper. 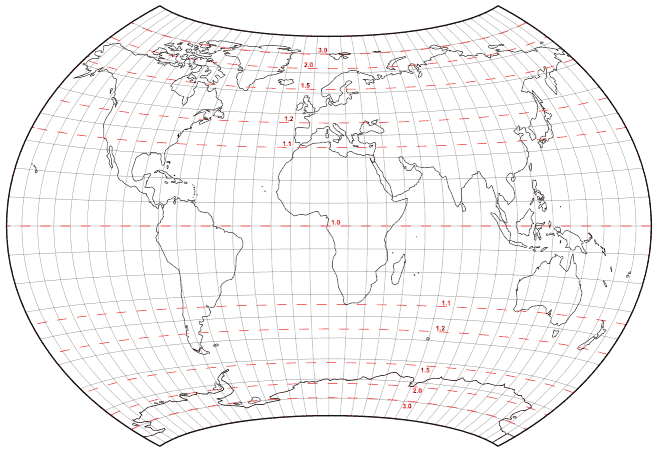 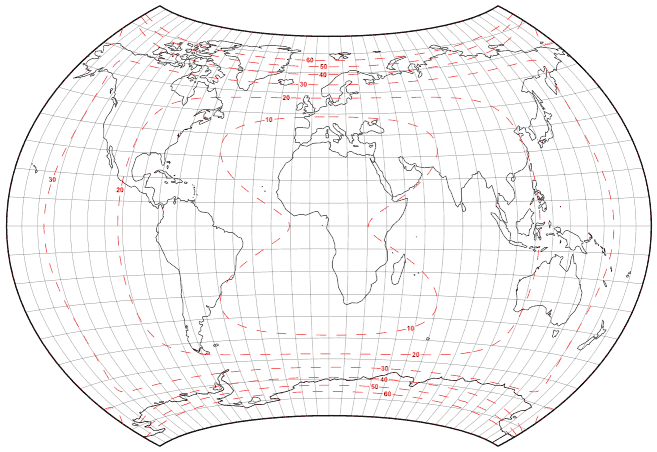 Regarding the angular distortions, Frančula’s original clearly shows a better distribution, but this was to be expected.