I’ve added six projections to my Projection Collection. Two of them are very similar to an existing projection, four are more distinct. Have a glance before I talk about them:

The two azimuthal Ginzburg projections are very similar, so we treat them together. 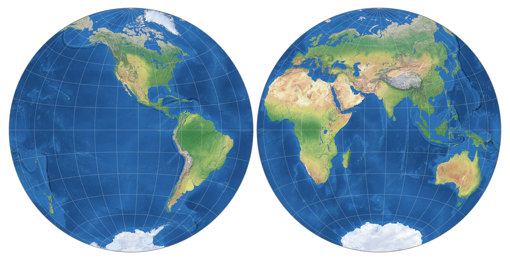 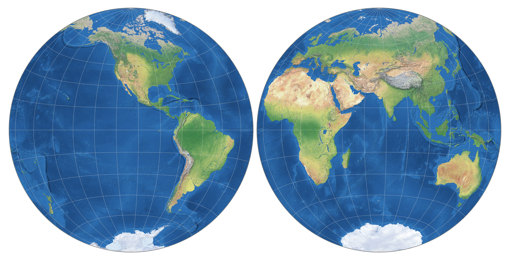 My only source about the two azimuthal Ginzburg projections is Furuti’s[1] small paragraph about them, so I can just quote him:

In 1949, Russian Georgiy A.Ginzburg proposed two azimuthal projections for hemispheres in school maps. Since Lambert’s equal-area projection compresses distances from the center of the map, causing considerable shape distortion near the borders, Ginzburg added a power term to Lambert's equations, slightly expanding the map. The result is neither conformal nor equivalent.

I’m a bit ambivalent about the results. On one hand, you could say: The deviation from equivalence is small enough not to give a false impression of the areal relationships of the countries and continents, but an improvement of the shapes at the edges of the maps is achieved. In this case, the modification would be advantageous. On the other hand, you could also say: The improvement of the shapes is so marginal that it’s not worthwhile to abandon the property of equivalence.

I tend to agree to the latter assessment, although the extra space near the edges offered by the Ginzburg projections may come in handy if you want put to labels on your map.
Well… this is kind of an academic question anyway, since hemispheric maps are rarely used in this day and age.

Here is the illustration of the Tissot indicatrix, and then we move on to a kind of projections you see much more often.

In 1968, János Baranyi of Hungary presented seven projections, which were, like the poupular Robinson projection, not generated by a formula, but tabular coordinates. I’ve never read the original publication, but I think, all of them aim at a well-balanced representation of the earth (again, like Robinson). Therefore, they are neither equal-area nor conformal. I had some doubts about how to classify them, because more experienced minds than me have filed them in the pseudocylindrical group of projections[2], but only Baranyi I and II match the strict definition[3] of the term. In the end, I decided to follow the strict definition.

Regrettably, I could add only four of them to my Projection Collection because I’ve got no software that is capable of rendering all seven. That is unfortunate because my favourite of the bunch is among those that I cannot add. 😕
But let’s go into detail. 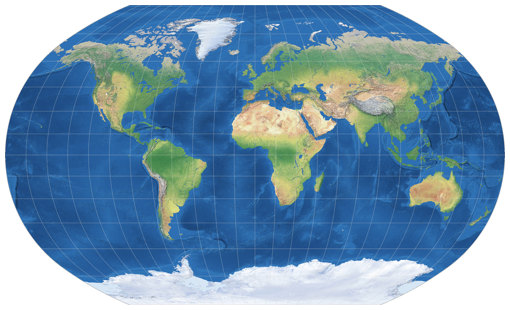 Baranyi I is a true pseudocylindrical with a pole line. Spacing of the parallels increases from the equator to the poles. It bears a certain resemblance to the Kavraiskiy VII, but in direct comparison you’ll quickly see the differences. Roughly speaking, I’d say that I’d prefer Kavraiskiy VII regarding the areal relationships and Baranyi I regarding the shapes. 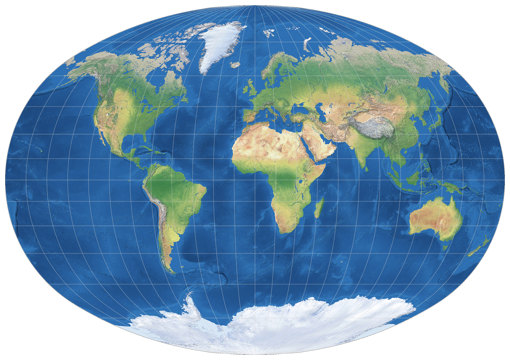 Baranyi II is a true pseudocylindrical pointed-pole projection, again the spacing of the parallels increases towards the poles. And again there is a loosely similar projection, the Fahey – compare them directly. As usual, the pointed poles lead to a much better representation of the shapes in high latitudes near the central meridian, but in turn to higher distortions near the bounding meridians. I feel that the outer shape of the projection is pleasant, but the amount of areal inflations is considerable. Therefore, I would recommend projection for decorative purposes only. 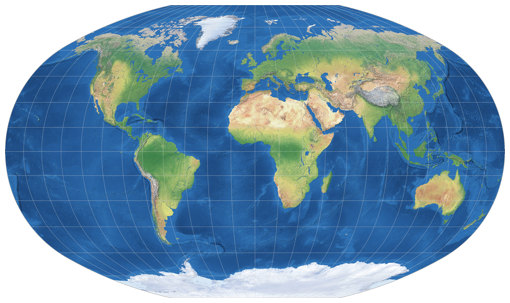 Baranyi III is – just like the ones that follow below – not a pseudocylindrical projection according to the strict definition: The distances of the meridians along a given parallel decrease from the central meridian to the boundary. The distances of the parallels to each other first increase from the equator north- and southwards and then (from approx. 50°N/S) decrease again. The inflation of the polar areas is therefore much smaller than in Baranyi I and II. A comparatively short pole line – one third of the equator’s length – ensures that they are also not stretched too much in east-west direction.

This means that in return, the angular distortions in the higher latitudes near the bounding meridians is much higher compared to Baranyi I; nonetheless, I can say that I prefer this projection over the first two, because all in all, the distribution of distortions seems more well-balanced to me. 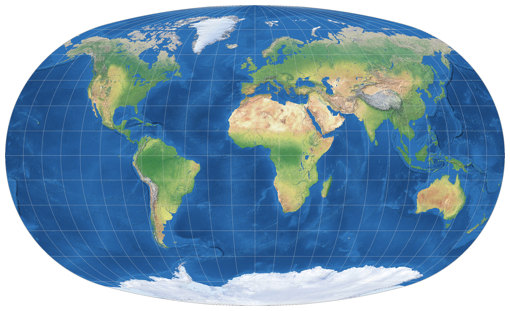 Baranyi IV is a pointed-pole projection with an interesting combination of properties: It has clearly visible apices (unlike e.g. Natural Earth II, which might be mistaken for a pole-line projection at first glance); it avoids the “lopsidedness” of the outer longitudes in the higher latitudes (unlike e.g. Apian II); it keeps the areal inflations lower than the aforementioned Baranyi II und Fahey. That’s a rare combination.

I think it’s a very nice pointed-pole, ummm… “pseudo-pseudocylindric” projection, even if the areal inflation could still be a little lower for my taste. It’s hard for me to say whether I prefer III or IV, both have their pros and cons. In general, however, I assume that a pointed-pole projection is more likely to be accepted than one with a short pole line. Maybe that assumption is based on the fact that I have actually seen Baranyi IV in a printed atlas, where it was used for the two main world maps (the double-page physical and political maps).[4]

Here’s the Tissot indicatrix for Baranyi I to IV:

Regrettably, I have no software to create the images needed to add Baranyi V, VI and VII to my Projection Collection. But thanks to Anderson’s Gallery of Map Projections, I can at least show what they look like: 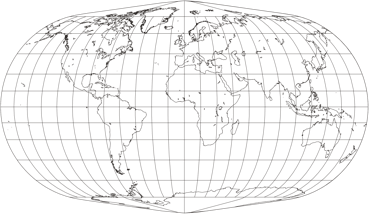 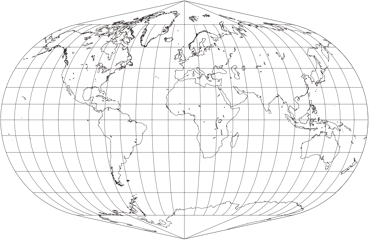 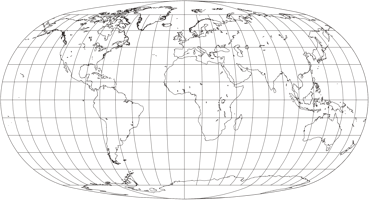 Baranyi V and VI (both pointed-pole projections) show a quite unusual feature: The curved meridians seem to turn into straight lines near the poles (at roughly 75°N/S). As far as I can tell from the images, the connection between the pole and ≈75° consists of two segments on projection V and a single segments on VI. I have to admit that this feature is rather displeasing to my eyes. Baranyi V has “increasing and decreasing” distances of parallels (like III & IV); on Baranyi VI the distances increase all the way up and down (as on I & II).

Baranyi VII is the only projection of the seven where the distances of the parallels continuously decrease from the equator to the poles. Therefore, the areal inflations are smaller than in the other six – which makes it my favourite Baranyi projection! Although I have a hunch that if you’d measure the overall distortion values (using e.g. the Airy-Kavraiskiy criterion), it’ll turn out that Baranyi IV comes up with a better result than VII.
But fortunately, I don’t have to care about that. 😉

The link to the libproj4 manual in footnote 2 is broken.

Unfortunately, there are multiple versions of the PDF out there and at the moment I do not know where to obtain the 2008 version that I have. I think I downloaded it from Evenden's website, which is of course now long gone. There is a 2005 version at http://libproj4.maptools.org

FWIW I implemented Baranyi I, II and III this this past spring using Zelenka's method. But Zelenka's Baranyi IV differs from that of Evenden (which I coded up 4 years ago) and of Györffy and Márton. The latter two versions of Baranyi IV are not identical but are very, very close.

Just coded up the Baranyi VI based on Zelenka's method, and the results matches nicely with Anderson's map based on Snyder. Will take a look at the V and VII later
Mon Oct 31, 2022 5:03 am CET

Thanks a lot for pointing out the dead link (I just fixed it) and your further information on the Baranyi projections! And it’s great that you coded up Baranyi VI – I hope you’ll be successful on V and VII, too! :-)

This might take a little while. The Baranyi VI came together perfectly, but there is something subtle going on so that the poles get clipped just a bit in the Baranyi V and VII.
Tue Nov 01, 2022 4:24 am CET

Got the Baranyi VII. There was an error at the poles because the various coeffiicients led to the square root of a negative there.

Unfortunately, not "clipping". Zelenka's thesis equations for the Baranyi 5 result in a plot close to that of Snyder/Anderson, but near the poles things go haywire and result in a pole-line. His example plot and also that of Snyder/Anderson show a point pole. So there may be a typo in Zelenka's equations -- I've already discovered 2 others -- but if so, it take some track it/them down.
Tue Nov 01, 2022 8:23 am CET

Figured out the problem implementing the Baranyi V. It was something dumb on my part. But having fixed that, I had to again tweak a coefficient so as to avoid a square root of a negative at the poles.

Was comparing the different formulations for the Baranyi IV again, and it looks like almost entirely something to do with the approximation for longitudex, with the maximum difference occurring at +/- 90 degrees from the center meridian. Visual comparison show almost no or none difference in placement of the parallels. As my current code is based on two sources that use almost exactly the same formulation, I'm sticking with it for now.
Wed Nov 02, 2022 5:06 am CET