Arrggh.
Time and again, I’m saying that I already got too many Wagner variants in the list of projections – and time and again, I’m adding new ones. At least this time, I’ve decided that sometime soon I’ll check if I should remove some of them again…

Of course I had the idea for the projections I’m going to show today when I was working on the January sheet of my projection calendar, which shows the Wagner II, a pseudocylindric projections with sinusoidal meridians. As I’ve said, I like this kind of meridian shape – and there’s something else that I like, namely lenticular projections which have curved parallels as opposed to the straight parallels of the pseudocylindricals. But as far as I know, there are no lenticular projections with sinusoidal meridians. So I wanted to see how a thing like that might look.

Using Flex Projector, I was able to create one by mixing the Wagner II with the bending of the parallels of the Wagner VII.
A description of the mixing process is provided below. 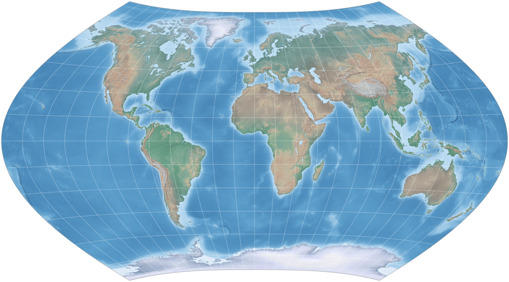 And here it is, the lenticular variant of Wagners II – sinusoidal meridians and curved parallels! It’s certainly nothing special or surprising, but that’s not was I was going for, I just wanted to see how it looks. And I think it is a nice alternative to the original. Now, projections usually don’t use curved meridians to please my eye, but to improve the distribution of distortions. Let’s have a look at a distortion visualization (as exported by Flex Projector) of the original Wagner II and compare it to the lenticular variant, starting with areal distortions: 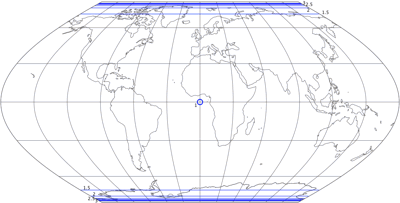 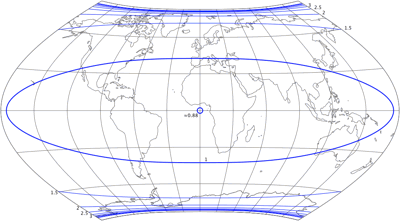 My variant departs from equivalence even more than the original. As you can see, the original’s areal inflation at the center of the map is 1 (= equal area), while the lenticular version has a slight areal deflation (0.88). Now, the decision on which parts of the map are deemed as inflated or deflated is somewhat arbitrary [1], but that doesn’t change the fact that my version has a higher variance in areal distortion values.
Huh? Didn’t I say something about improvement? Yes I did, but I referred to angular distortions: 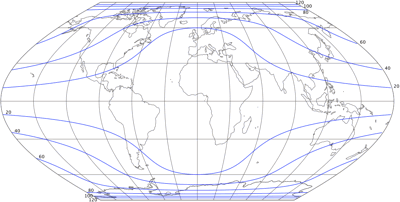 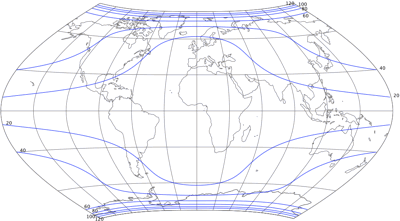 The »corners« of the map (Alaska, eastern Siberia, Japan, New Zealand) benefit from the curved parallels. Since the Wagner II is a compromise profitieren that keeps quite close to equivalence it seemed reasonable to me to allow a slight additional departure from being equivalence to allow the decreased angular distortions. At least judging by the values given in Flex Projector (there are other metrics which might give other results!) in total, it is an improvement:

So now I had a sinusoidal lenticular projection and it has at least some advantages over the original. You can compare them directly:
Wagner II original vs. Wagner II lenticular
The link triggers the “Expert Mode” and jumps to the “scaled to same width” comparison which is more appropriate here.

But my curiosity wasn’t satisfied so far. Now, I wanted to try lenticular version of Wagner I and Wagner III, to… 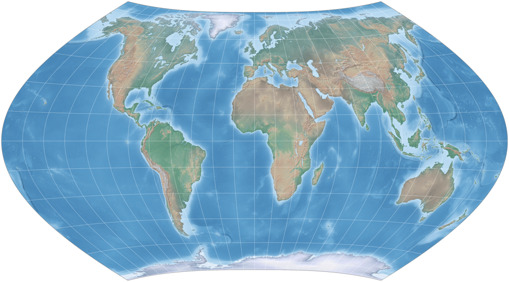 First things first: Here, I mixed the Wagner Im again with the bending of the parallels of the Wagner VII. And although both projection are equal-area, the result is not!
It’s an aphylactic (= compromise) projection. Since equivalence is an important property, I thought it’s inappropriate to use the same name – thus, I called it Lenticular Wagner I.a (with a for aphylactic).

We dont’t need a areal distortion visualization for the original (because it has none) but for the lenticular variant I’m showing the inflation at 0.1 intervals to emphasize that it isn’t equivalent: 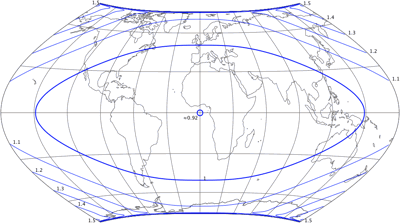 For the angular distortions, we can compare both version again: 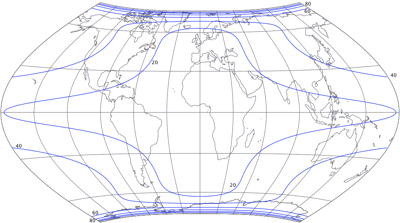 We see the same kind of improvement as above.
In numerical values:

The Acc. value doesn’t rise as much as on the Wagner II which is no surprise since we’ve introduced areal inflation into the projection. Still, it is a bit of an improvement but you have to decide if that is worth dropping the equivalence.
Frankly, I don’t think so. When I want equivalence, I want real equivalence. If I can feel that I can depart from it, I can go for the Wagner II to furtherly improve on the angular distortions. Of course it’s possible to create a lenticular Wagner I that’s truly equal-area. But I have to admit that I’m not the one who can do it. 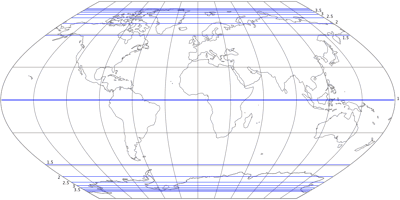 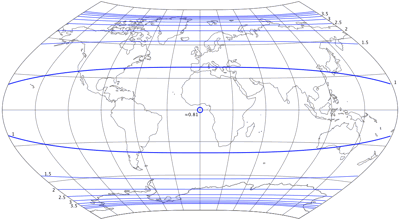 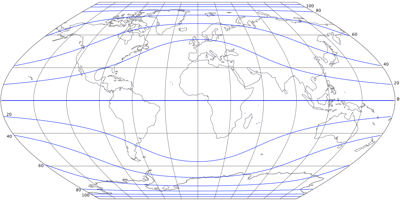 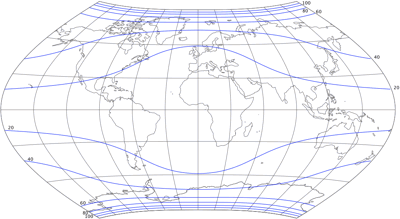 Well, now I know how lenticular projections with sinusoidal meridians look. That’s a win.
Besides that… well, the variants of Wagner I and III lose (in the implementation shown here) their metric properties of equivalence and the equally spaced parallels, respectively. Thus they are no recommendable alternatives to the originals. Since the Wagner II has no metric properties of that kind, it can’t lose them. 😉
I like this one because it improves on the angular distortions, while the worsening of the areal distortion doesn’t matter much here (we already are in field of compromise projections).

For this reason, only the lenticular Wagner II will be added to the list of projections

Regarding that a survey performed a few years ago [3] revealed that map readers strongly prefer elliptical over sinusoidal meridians, I strongly doubt that anyone besides myself would be interested in actually using a projection like that. Especially since another result of the survey was that curved meridians aren’t well-liked either (although I never quite understood that conclusion, but that’s a different subject).

But what of it?
This was an experiment in the first place and not all experiments are successful. And there have been projections before which were created for academic reasons. (We’ll see an example of that in the June part of my little calendar series).

How I generated them

As announced at the beginning, I’d like to show how I mixed the projections. Use the following steps in Flex Projector:

Except for the selection of projections in step 2 I applied the same procedure for the lenticular Wagner I and III.

If you mix Wagner III with Wagner IX instead of Wagner VII, do the parallels stay equally spaced?