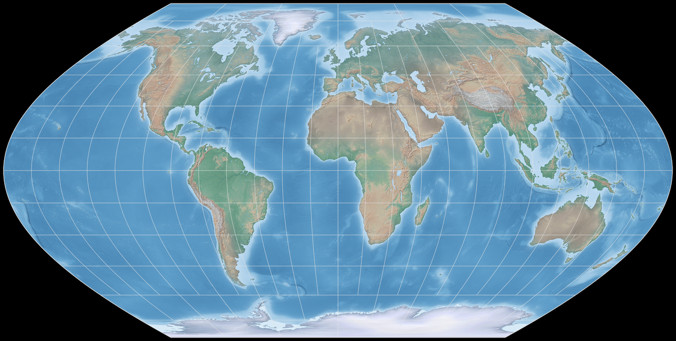 Wagner II is a pole line projection with sinusoidal meridians – a bunch of projections like this have been introduced in the first half of the 20th century: Apart from its siblings, Wagner I and Wagner III, there were Eckert V and Eckert VI, Winkel I, McBryde-Thomas Flat-Polar Sinusoidal…
– and some of them even have been invented more than once (probably indepently), that’s why the Wagner I is also known as Kavrayskiy VI, Siemon II and Werenskiold II.

As far as I know, none of them has become popular. Some of them were used for climatic maps, but that’s about it. But maybe that’s even the reason why I like them: They look nicely different, a bit unusual – yet not too horribly unfamiliar. And I thought that this makes the Wagner II a nice opener from my calendar.

The projection is equivalent along the equator, areal inflation then rises towards the poles to reach an inflaton of 1.2 at 60° North/South and then 2.0 at about 80°. That’s a moderate inflation and you can wonderfully debate about the question whether this is an advantage or a disadvantage, but I’m not gonna do that now.

I prefer to mention that the Wagner II is, like all nine projections that have been named after Wagner, customizable. In this case, you can freely set the length of the pole line, the aspect ratio and the amount of areal inflation. Regrettably, no map projection software I know supports this customization, but I’m working on an implementation for d3-geo-projection. It still needs a bit of polishing but I can already give you two examples of a customized Wagner II. 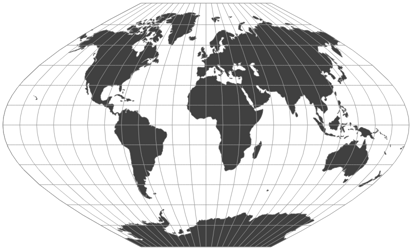 For the Wagner II image in the calendar, I used a slightly modified version of the Natural Earth Cross-blended Hypsometric Tints. Projected with Geocart.