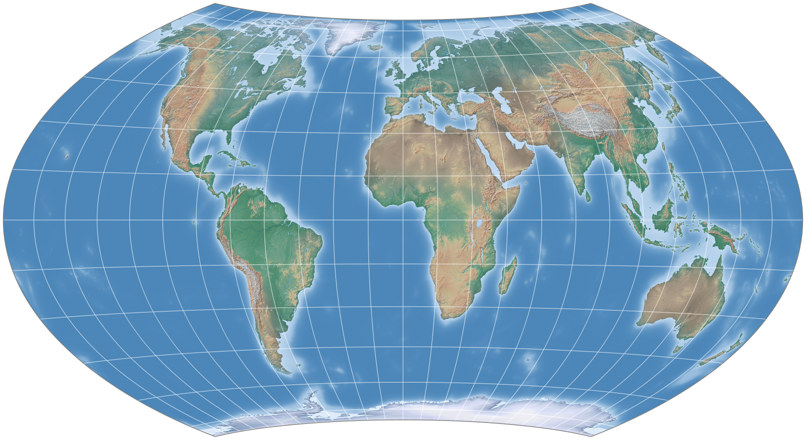 Eighty years ago, in 1941, Karlheinz Wagner the projection that nowadays is usually referred to as Wagner VII or Hammer-Wagner to the public.[1]
Happy Birthday!

Wagner himself used none of the names given above. He simply *cough* called it “Flächentreuer Entwurf aus der transversalen flächentreuen Azimutalprojektion durch Umbeziffern entwickelt”, which roughly translates as “Equal-area projection, developed by Umbeziffern from the transversal azimuthal equal-area projection”. Maybe he noticed that this is a somewhat awkward name, so in 1949[2] he switched to “Hammer’s projection with a pole line”.

It was introduced in an article titled Neue ökumenische Netzentwürfe für die kartographische Praxis – New Ecumenical Map Projections for Cartographic Practice –, and I have to elaborate on two things in this title:

1. What’s an ecumenical map projection?
Maybe you (just like I did) only know this word in a religious context. However the word ecumene also used to refer to “all inhabited areas of the world”.[3] Think of thematic maps covering agricultural or economic topics or population density. Maybe also general-use or even political maps.

This is important to note because Wagner developed the projection specifically as an equal-area alternative to the Winkel Tripel which already was widely used at that time (at least, in Germany). And compared to this one, the Wagner VII of course squishes the polar areas extremely in North-South direction. But for the purposes mentioned above, it is (more or less) true that the accurate representation of these parts might be less important.

2. He talks about map projections. Plural.
So what are the other projections besides the Wagner VII?
Well, basically Wagner introduced just a single projection, but it can easily be customized in three ways:
– the length of the pole line,
– the curvature of the parallels,
– the aspect ratio of the main axes.

Wagner presented four projections variants using this approach, and a lot of other are possible – hence the plural.

The transformation method that is used to do this is called Umbeziffern (renumbering) but since I talked about this (and the Böhm notation which is a way to describe the resulting variants) more than once[4], I won’t explain it again here…
Hey! Did I just hear a “Phew!” in the audience?!? 😉

Let me just briefly mention that the length of the pole line is given by a chosen parallel of the parent projection (the transversal azimuthal equal-area projection), which is referred to as ψ1, while the curvature of parallels is determined by a meridian of the parent, λ1.

So here are the four variants presented in the paper – the first one being the one that nowadays is known as Wagner VII, the other three I’ve labelled VII.b, VII.c and VII.d. I’ll show them in a graphical representation that approximates Wagner’s original drawings (the caption states the Böhm notation, in which the first two figures note ψ1 and λ1, respectively): 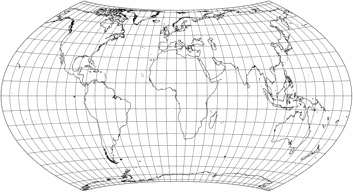 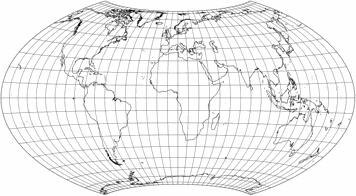 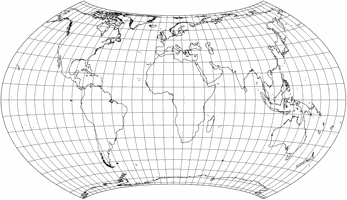 You will notice that the four variants do not differ that much. That’s because Wagner had a, well, strict notion about the acceptable range of the customizable values (at least for world maps). More specifically, he noted that the aspect ratio of the main axes should not move too far away from 1:2, and consequently, that the the most appropriate values for ψ1 are to be found between 60° and 70°, and for λ1 between 60° and 90°.

Let’s play with these values of the pole line length and the curvature of parallels. Preserving the aspect of 1:2, here are the four possible combinations of the minimum and maximum: 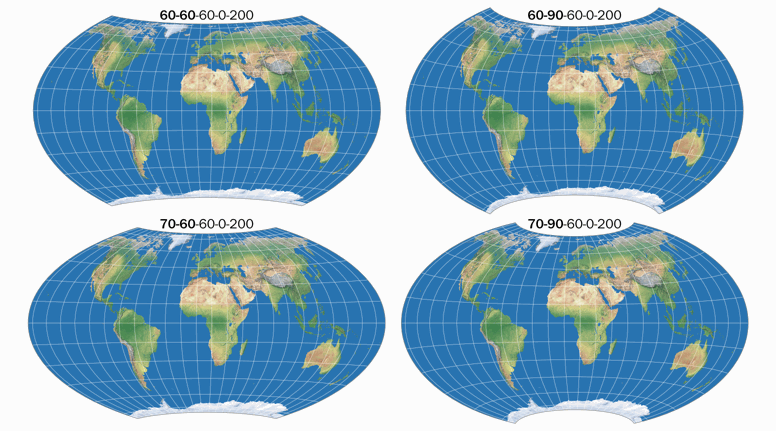 The pictures give an impression of the scope within which, according to Wagner, one arrives at a “good earth represenation”. We’ll see in a moment that other map makers have been less strict.

In his 1949 book “Kartographische Netzentwürfe”, Wagner took up the projection again - as already mentioned above, now under the name “Hammerscher Entwurf mit Pollinie” (Hammer’s projection with a pole line). There, however, he only showed the first of the four variants of his 1941 article. And while he certainly mentioned the variations of the apprach in the book, he unfortunately emphasised them less clearly. This is perhaps the reason why John P. Snyder also only mentions them “in passing” in 1993 – and the possible variety of forms was subsequently only taken up sporadically in the cartographic literature.

In the book, Wagner also adds a further way of modification, which is the possibility of adding a “prescribed areal inflation” which lead to compromise projections (like Wagner VIII). But since this is a blgopost about the 1941 jubilarian, I will refrain from a detailed discussion of the procedure at this point.
Although contradictorily, I will regard the Wagner VIII in the following section as well…

The Wagner VII and his aphylactic brother VIII have been used in some German atlases and other publications. The ones that I know of are: 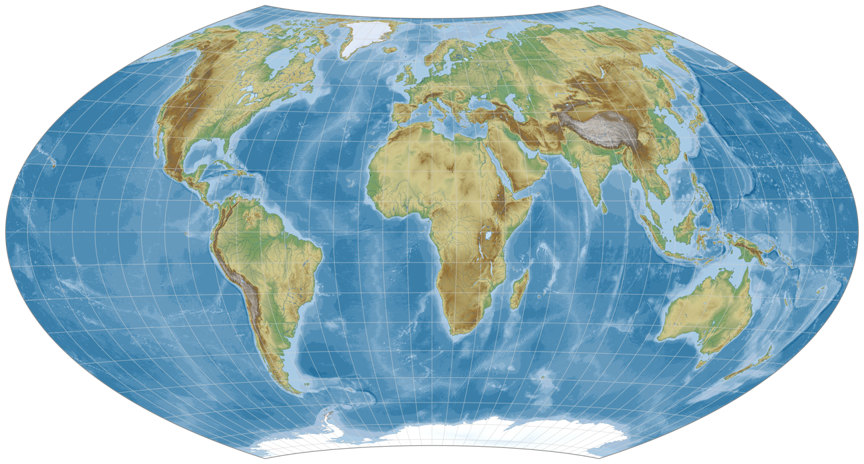 Wagner VII, as shown in the Atlas zur physischen Geografie and in Meyers großer Weltaltas.
The imagery presented here is somewhat alike, the configuration is either a very close approximation or identical.

Wagner VII ocean map, as shown in the Atlas zur physischen Geografie.
Sorry about the crude reconstruction but at least it gives you an idea of what the map in the atlas is like.

The configuration 70-56-60-0-200 has now been added to my website. Continuing the naming scheme I applied to Wagner’s own variants, I called it Wagner VII.e. And yes, I know: There already are lots of Wagner variants there. However it would have felt wrong to list versions made by other creator, but to leave out an “original Wagner”.

Speaking of other creators…

Wagner VII variants by other creators

We’re back at equal-area projections only again, and take a quick look at Wagner VII variants made by other creators. The list includes two projections – Hammer and Eckert-Greifendorff – which were created prior to the Wagner VII but also can be written as its derivate.

As you can see, some of the creators were far less strict regarding the range of “acceptable” configuration values. But they had reasons to depart from them: Aribert Peters, Frančula[12] and Canters[13] used different metrics in order to achieve an optimization of distortion values. Dr. Böhm’s[14] projections… well, I hope that sometime soon, I’ll at long last get around to say a few words about them as well. For the moment, you just have to take my word that he had reasons.

In order to celebrate the event, I’ve added another Wagner variant of my own to the website. It’s an asymmetric version of one of the 1941 projections, namely of the Wagner VII.b: The northern hemisphere is exactly the same, but by stretching the south pole line, the continental areas (except Antarctica) of the southern hemisphere are improved.

In an upcoming blogpost (hopefully soon) I’m going to say a few more words about the asymmetric Wagner VII.b – but for now, here it is: 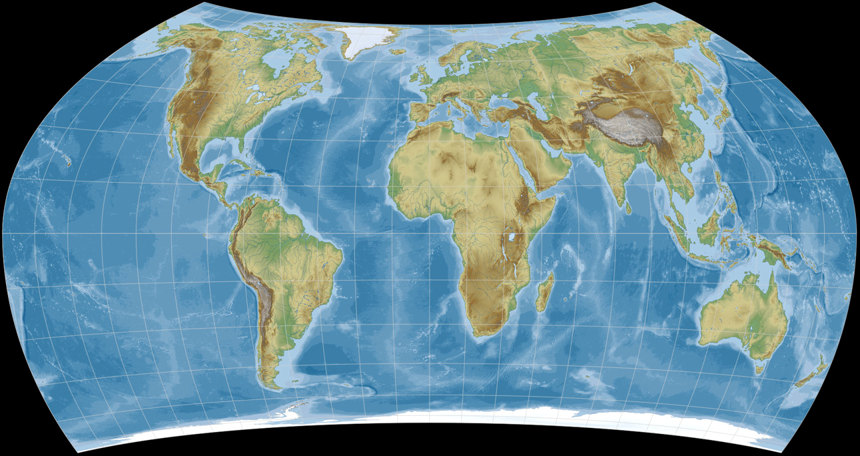 Apart from the set of different shapes shown here, you could also use the Wagner VII to create projections with straight parallels, i.e. pseudocylindricals. But basically, there’s no point in that – after all, there already are lots of pseudocylindric projections to choose from. And even if you want a customizable one, you might be better off with the Hufnagel projection.

Nonetheless, I daresay that whenever you need an equal-area world map, you’ll find a Wagner VII configuration that suits your needs. This of course doesn’t mean that there’s no other projection that’ll be just as good or even better for the purpose in question. You also have to remember that, despite it’s customizability, the Wagner VII can’t escape the basic characteristics of its parent projection’s graticule. You won’t be able to create projections like Strebe 1995 with its rounded corners, or Snyder Minimum Error Pointed-Pole and Hufnagel 10, which both have a pointed pole that looks like a pole line.

Wagner VII is one of my favourite equal-area map projections. This of course is a subjective choice, but I think you can’t deny that it’s one of the most useful map projections. And with the addition of the “prescribed areal inflation” eight years later it became even more useful.

P.S.: The well-known variant of Wagner VII is offered by many map projection applications. G.Projector additionally offers a few other variants. Der fully customizable Wagner VII/VIII is supported by Geocart and the d3-geo-projection scripts.