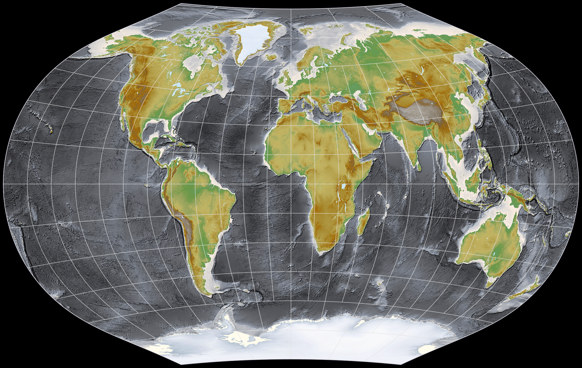 The Ginzburg V was developed in 1950 to be used in Soviet school atlases[1] but remained rather unknown apart from that. Which is regrettable, in my opinion it’s a very elegant, attractive projection.
It certainly doesn’t look too horribly unfamiliar because its “look & feel” it quite similar to the famous Winkel Tripel:
Compare Ginzburg V and Winkel Tripel.

However, this calendar is about projections that show particularly low distortion values according to one or the other comparison scheme. Unfortunately to my knowledge the Ginzburg V has been surveyed only once, namely by Richard Capek[2] when he introduced his distortion characterization Q in 2001, where it took the pole position of a hundred projections!
Granted, since then a bunch of projections with minimized distortion values have been developed so it’s not unlikely that the Ginzburg V meanwhile has been outpaced – and Q does have its drawbacks (I guess I’ll have to write about that at some point in the future), but still that’s a good start for my collection of low distortion projections.

Let’s have a look at the distortion visualizations: 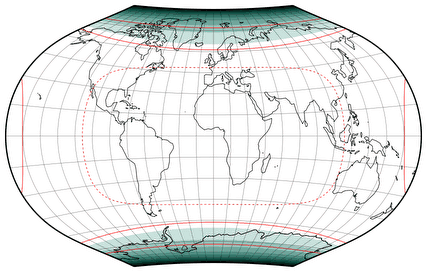 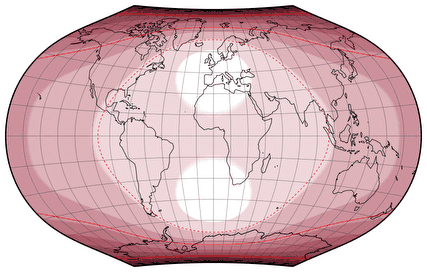 A word about the map image:
A short while ago, I found a rendering of the Lagrange projection on John G. Savard’s great map projection website which used the NOAA ETOPO2: Topography and Bathymetry dataset. I instantly liked the black/dark grey oceans but I was not so fond of the way the continents look. So I modified one of my own elevation maps, created with the help of Simple DEM Viewer, to have oceans in the same style, and projected it to Ginzburg V with Geocart.
I like this image a lot! It probably would be difficult to handle for a real world maps with labels, but I think it’s great for decorative matters.

Next month, we’ll see one of the aforementioned “bunch of projections with minimized distortion values”.