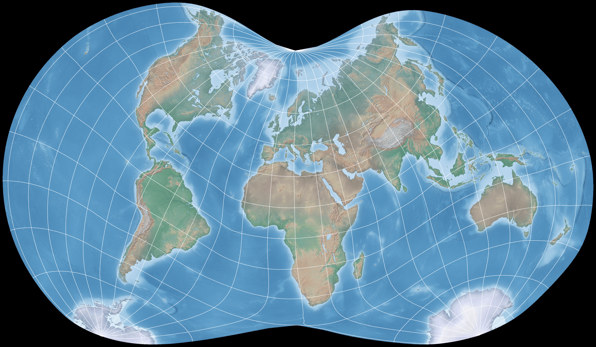 I promised an unusual projection for this month – and that applies to the Danseiji III, doesn’t it?
In 2019, Justin Kunimune presented a new method to create map projections, along with seven examples of its utilization. They will be added to my website soon and then I’ll also write a bit about them.

So for the moment, I’ll just briefly summarize the properties of Danseiji III: Like Strebe 1995, it pushes the unavoidable distortions as much as possible in the ocean, keeping it away from the continental areas. The differences are: Strebe 1995 has pole lines, is equal area and symmetrical, while Danseiji III is a pointed-pole compromise projection that abolishes any kind of symmetry.
It has both angular and areal distortions – but on land, they are really low. The arrangement of the continents differs visibly from maps with a straight equator that we are used to, however it’s still very familiar, so I guess it won’t confuse anybody too much, not even casual map users.

If you can put up with the unusual appearance (or even welcome it), I think Danseiji III a fine projection for atlas cartography or general-use wall maps.

As I’ve said, I’ll write more about the Danseiji projection soon – if you don’t want to wait, refer to Justin Kunimunes’s blogpost Introducing the Danseiji Projections. And in the next part of my calendar series, we’ll see the first equal-area projection of this year.