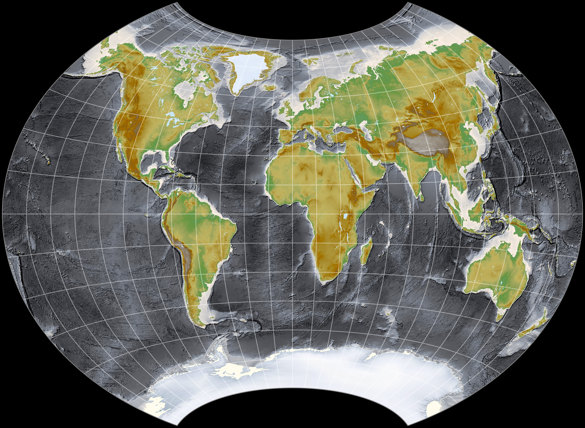 Canters W09 is, like last month’s Frančula XIII, an optimization of the Wagner IX. Both authors claim to have minimized the distortions – so why do they (the projections, not the authors 😉) look different?
Because the Canters and Frančula used different metrics in their optimization: While Canters optimized according to the mean finite scale factor, regarding only the continental areas excluding Antarctica; Frančula utilized the Airy-Kavrayskiy criterion, taking the full map between 85° North and South into account.

Still, I think there’s a certain “family resemblance” – that’s why I mentioned a cousin last month (although mathematically they’re more like brothers):
Canters W09 vs. Frančula XIII
Aesthetically, I prefer Canters W09, while regarding the distribution of distortions I like the Frančula XIII a little better. Summa summarum I can say that I like them equally well.

So by now we’ve had seven projections (including the two shown on the calendar frontispiece) that are quite conventional, i.e. they look very much like a standard world map. It’s about time for an unusual one: We’ll see that next month.