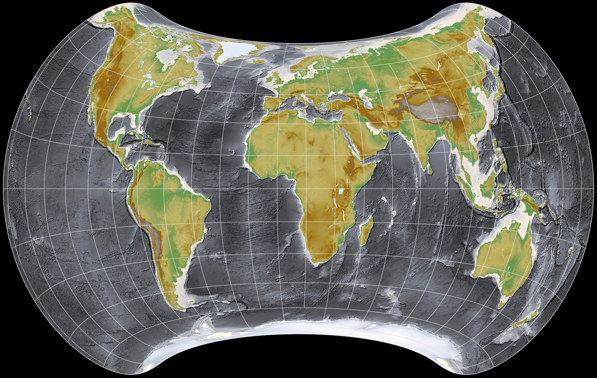 Strebe 1995 is an equal-area projection that has very low angular distortion values according to… umm.
To be honest, I don’t know the distortion values of this projection. As far as I know, they have never been determined, and regrettably, I don’t have any tools to calculate the results according to the Airy-Kavraiskiy criterion, or Canters’ mean finite scale factor, or Goldberg & Gott’s metric or any other comparison scheme.

What I can say is that it indeed succeeds in keeping the worst distortions away from the continental areas (except Antarctica). Even better in this regards is its asymmetric “brother” Strebe 2011: 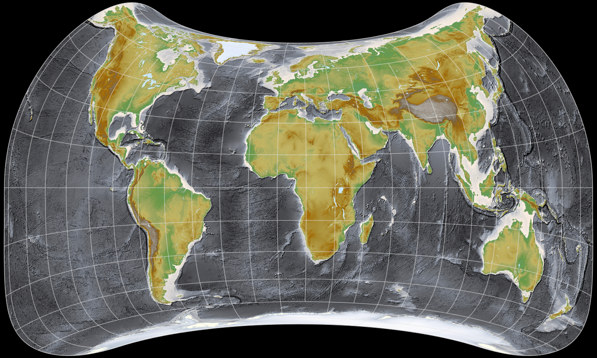 So why didn’t I chose that one for the calendar?
I wish I could remember that. Maybe it’s because we’re going to have an asymmetric projection next month and I wanted a bit of variety. Maybe it was because aesthetically, I prefer the symmetric variant. I honestly don’t know anymore.

Oh, well. It doesn’t matter. Suffice it to say that if you’re looking for an symmetric equal-area projection with low angular distortion values on land areas, the Strebe 1995 is a great choice.

That was the last equivalent projection of the calendar. In November and December, we’ll have aphylactic ones. In the course of September, however, I will (hopefully) come back to Strebe projections once more.
So long!