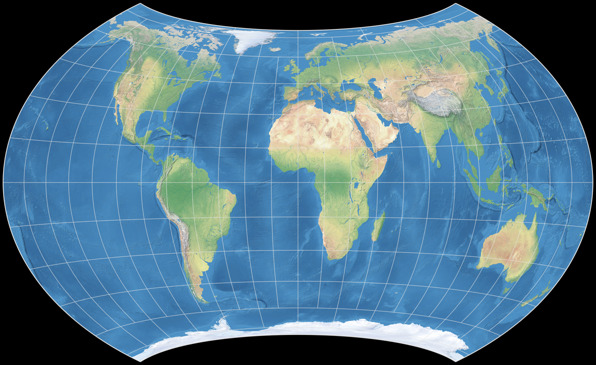 Frančula XIV, introduced in 1971[1], is the first equal-area projection in this calendar.
Of course, when you talk about low overall distortions, you usually will not find any equal-area projections in the leading group (although this does also depends on the comparison scheme you’re using, I’ll come back to this matter next month) – the property of equivalence comes at the price of comparatively high angular distortions. But of course you can compare equal-area to each other to see which one’s got the lowest mean angular distortions. And this is why Frančula XIV is listed here.

It is a variant of the Wagner VII, obtained through Umbeziffern. I already gave distortion values and pointed out its similarity to the Wagner VII.d (presented in 1941 by Karlheinz Wagner, along with the well-known Wagner VII[2]) in my blogpost about the Frančula projections; but I’d like to show another visualization of angular deformations, compared to the aforementioned Wagner projections as well as Eckert IV which often is (legitimately!) listed as equivalent projection with very low distortions. 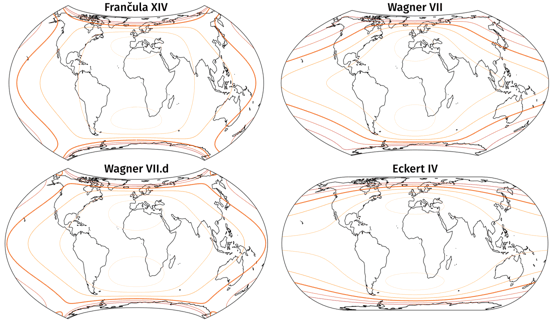 Aesthetically, I prefer the two Wagner projections – but I have to say that the distribution of distortions of Frančula XIV is very advantageous when your goal is to reduce distortions on land.

’nuff said.
We’ll stay with the equal-areal projections for another three months. So long!