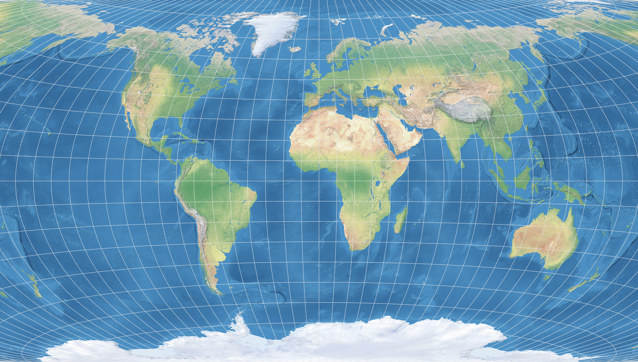 Usually both variants are shown having a “bowl-shaped” form, but above you can see a rectangular shape: I chose to use a representation that, as I mentioned in February 2020, often is used for the van der Grinten I: The projection is extended beyond its usual boundaries, repeating certain parts in the east and west until they fill up a rectangular space.

I have to say that I’m not too fond of this technique – but I already had both Winkel Tripel variants in previous calendars, so I at least wanted to show a different representation this time.
I guess I do not even have to mention that the advantageous distortion characteristics only occur within the usual bowl-shaped boundaries while the distortions in the repeated parts are severe.

So that’s it for this month… Wait, didn’t I promise a substantially longer blogpost last month?
I did. But I changed my mind and decided that it’s better if the other things I want to say about the Winkel Tripel will be presented in a separate blogpost. I’ve already started to write it so hopefully, it’ll be available before too long.

Next month, we’ll see one of the aforementioned low-error projections that were obtained with the help of computers.