June: Adams World in a Hexagon 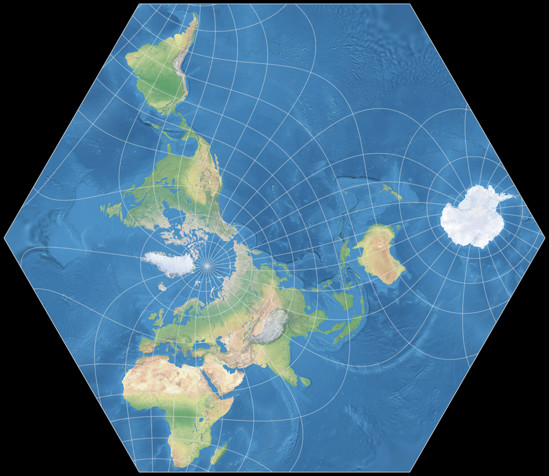 In a recent blogpost I mentioned that “there have been projections before which were created for academic reasons”. Here’s one of them.
John P. Snyder wrote (in Flattening the Earth, page 266):

Snyder continues that this work was done by Peirce, August, and Guyou in the late nineteenth century, and taken up in the twentieth century by L.P. Lee and … O.S. Adams (see his hemispheres and two worlds in a square).

So this is Adams’ hexagonal projection.
Usually it is shown with the north pole in the center of the map, in this aspect the projection manages to keep the continents out of the areas with the worst inflations. But I already had one of those “conformal projections bounded by simple geometric figures”, namely the Peirce quincuncial, in May. So I at least wanted to try a different projection center, but without messing with the advantageous distribution of distortions. With a center at 47° North, 0° East and a axial tilt of 8° CCW I found an aspect which more or less succeeds in this matter – and, on top of it, show Antarctica without interruptions. Africa and South America even fare a little better, areas close to the North Pole are of course worse.

Areal distortions in the original aspect (left) and my variant of Adams World in a hexagon, deeper color signifying greater inflations.

Next month, we’ll have another conformal projection, but that’ll be the last one for this year.
See you soon!

For the image in the calendar, I used a slightly modified version of Natural Earth II with Shaded Relief, Water, and Drainages. Projected with Geocart.