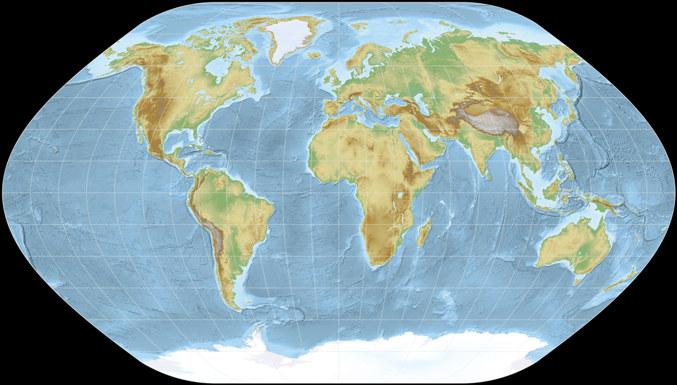 This month, we’ve got a projection which doesn’t look unusual – I guess to most people, it just looks like a world map has to look – but actually is unusual because it is rarely used. With one exception:

It is the Hölzel projection which was created in the 1950ies to be used in the Austrian Hölzel atlas, and there it is used to this day [Update Nov. 2022: Regrettably, the preview isn’t available anymore]. It’s a pseudocylindric projection with equally spaced parallels which was mathematically derived from Eckert V. It was compressed horizontally – Eckert V has an aspect ratio of 1:2 while it’s roughly 1:1.75 on the Hölzel –, among other things this leads to the fact that it fits the spread of the atlas better, leaving just enough space for a few legends without wasting too much space. I don’t know if that was the reason for this modification, it’s also quite possible that it was about the distribution of angular distortion, which turns out to be somewhat advantageous for the inhibited areas of the Earth on the Hölzel:

Of course, you can get very similar distortions in the Eckert V by simply stretching it vertically by a factor of about 1.1 – but the Hölzel introduces another modification, namely the rounded corners which have a more “organic” appearance and thus, may regarded as a bit more “friendly”.
Compare the Hölzel projection and Eckert V directly.

All in all, the Hölzel projection is, in my opinion, a good pick if you want or need a pseudocylindric projection with equally spaced parallels (although I won’t deny that this is not my favorite kind of projection).

Next month, we’ll have an equal-area projection that looks unusual and is unusual, because I’m pretty sure it has never been used anywhere.

The image was created with SimpleDEMViewer using ETOPO1 elevation data. Projected to Hölzel with Geocart. The color set is based on the Maps template by Eric Gaba, username Sting.