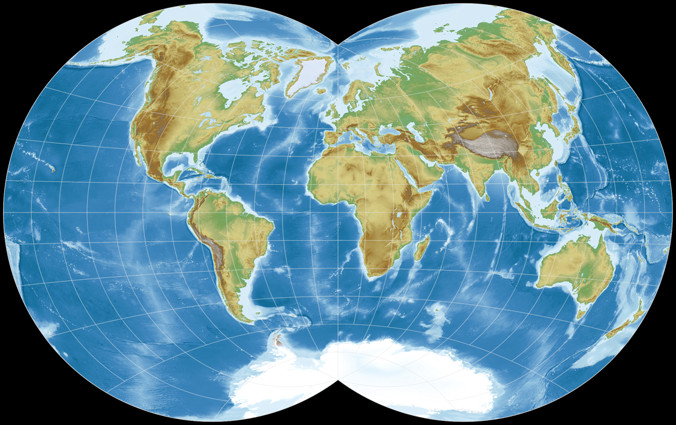 by Pezibear at Pixabay

Maybe that’s due to its unusual shape, van der Grinten called it apfelschnittförmig (in the shape of a cut apple or just apple-shaped; the projection was originally presented in a German journal), and when you look at an apple cut in half, you know where he got the idea.

But personally, the shape always reminded me more of the telophase in cell division – and when you look at the image provided here, you know where I got the idea.
While this shape sure is unusual it’s not unique. Actually there are a fistful of projections like this where the world is enclosed in two intersecting circles or ovals – one of them we’ll meet in the September part of this series. (And hey, maybe I should call them the telophasic projections? It certainly has a ring to it! Hmmmm…)

Like the other three, van der Grinten IV was constructed geometrically, the corresponding formulas were developed decades later. Since except for the equator and the central meridian, which are straight lines, all meridians and parallels are circular arcs, the entire graticule can be drawn with a ruler and a compass and moreover, you’ve got the right ratio of equator and central meridian – »I admire its purity«, I am tempted to say. 😉

Angular distortions are moderate, but there’s considerable areal distortion, especially in the “corners” of the map. Alaskans should love it. Overall, I like the projection better than its famous sibling. Nonetheless, I’s probably only recommend it if you want an unusual map.
For the calendar, being unusual was what exactly I wanted for some of the maps so van der Grinten IV was a good choice.

As promised in the beginning, I’d briefly like to come back to the famous van der Grinten I. This projection has been used in several atlases throughout the 20. century – and even today, if you look for a world map to hang up on your wall, it’s hard not to stumble across the van der Grinten I.
The original projection looks like this: 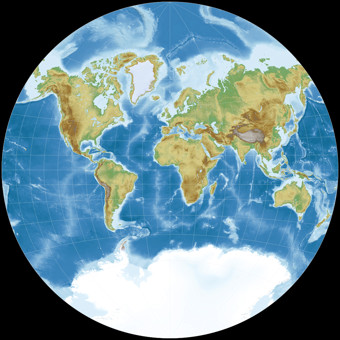 So now, you probably go: “Huh? What is he talking about, I’ve never seen a wall map like this!” And yes, you’re right about that, because Grinten’s first projection is usually presented like this: 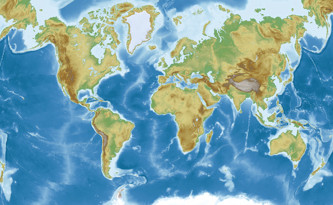 As you can see, the projection gets truncated at the top and the bottom, with repetitions on the left and right edges. The former most likely to save space and avoid the enormous areal inflations, the latter… well, I have to guess here: in order to get a rectangular map. For some reasons, people seem to love rectangular world maps. Just google for comments regarding the AuthaGraph map and soon, you’ll stumble across someone who is praising the map and says: »And it’s rectangular, too!«

We’ve got so many projections to choose from, but when it comes to wall maps, the mapmakers time and again resort to the truncated Grinten I with repetitions.
Curios.

That’s it for now. Just like last month, I can say that we’ll have a totally different projection next time.