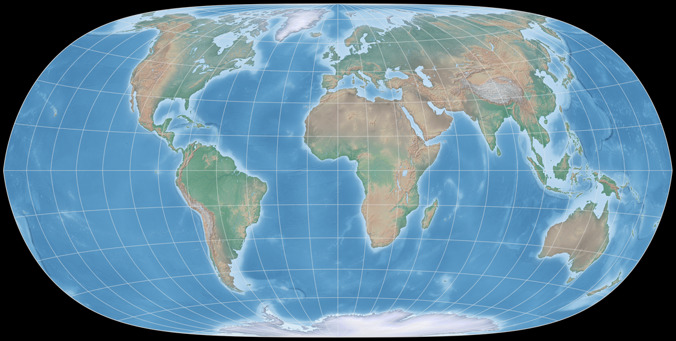 I’ve handled Strebe’s 1992 series of equal-area projections in detail in the blogpost linked to in the table above. So for now, I think it’s sufficient to summarize:

The Strebe-Mollweide is a pointed-pole projection which at first glance looks like a projection having a pole line. That’s interesting because I think that to a lot of people (including myself) a pole line looks & feels more »natural« (although it actually isn’t), however an equal-area pointed pole projection usually is better at showing both Africa and Greenland with tolerable distortion of shapes – which of course is nothing more than a personal preference. I simply like it when this is achieved but it is in no way an »objective« basis of assessment.

The projection has its drawbacks: Alaska looks quite squished, and the meridians’ kinks at the equator were described as »undesirable« by the author himself. Nonetheless I think that it’s an usable equal-area projection that deserves some more attention.

Next month, we’ll have another equal-area projection, but it’s going to be quite different.
I wish you all the best in these testing times!

For the Strebe-Mollweide image in the calendar, I used a slightly modified version of the Natural Earth Cross-blended Hypsometric Tints. Projected with Geocart.