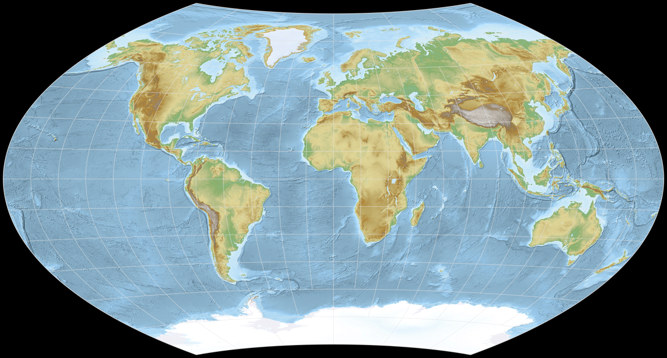 For the calendar sheet of October I again decided to use a projection that doesn’t look unusual but is rarely used: Wagner IX is a lenticular projection with equally spaced parallels along the central meridian – a description that also holds true for the Winkel Tripel which is one of the most frequently used projections for world maps.

Their most striking difference is of course the shape of the pole line, and personally, I prefer the curved variant of Wagner’s projection. I guess a lot of people would disagree here.

In the calendar I used Wagner’s original variant of this projection, but I’d like to mention that here (again) that apart from the aspect ratio, you can also modify the length of the pole line and the curvature of the parallels.
Try my quick-and-dirty implementation of the customizable Wagner IX (which will soon be replaced by a cleaner version).

The projections for November and December will look unusual again.

The image was created with SimpleDEMViewer using ETOPO1 elevation data. Projected to Wagner IX with Geocart. The color set is based on the Maps template by Eric Gaba, username Sting.