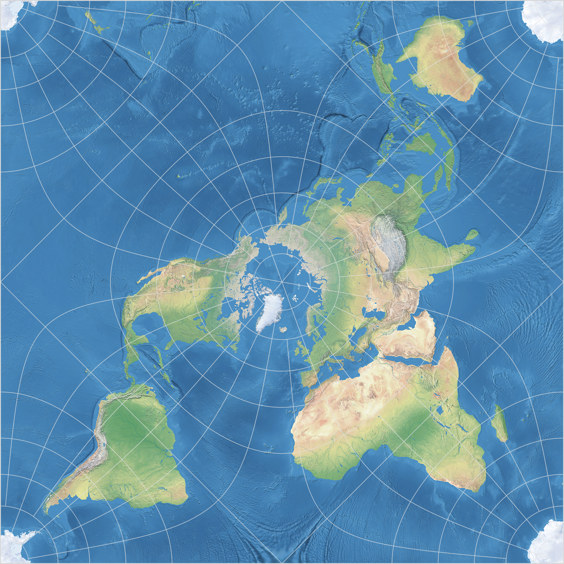 I think I can handle this month’s projection briefly:
The Peirce Quincuncial is conformal and shows the world in a square. Like all conformal projections it has great distortion of area, but in the aspect presented here – centered to the north pole and 20° West – enlargement of most landmasses is … bearable. Conformality fails at four points, namely where (in this aspect) the equator meets the boundaries of the map.

If you for whatever reason need a square map – well, there are other projections, like a truncated Mercator (the Mercator image below is truncated at 84° North/South, in order to get an exact square you need to set to truncation to 85°3′4.0636″ / 85,051129°) or Gringorten, Adams I and II or Tobler world in a square and the equirectangular projection with standard parallels at 60° North/South. But Peirce certainly is a good choice: Because of its eye-catching uniqueness it’s well-suited for an decorative map, but it can still hold its own when you want to use the map to convey information.

Have a glance at the other square projections:

Two more things – firstly:
To quote Wikipedia, a quincunx is a geometric pattern consisting of five points arranged in a cross, with four of them forming a square or rectangle and a fifth at its center. Peirce chose this name for his projection because it matches this arrangement, with the northern hemisphere in the center and the southern hemisphere in the corners.

Secondly: The Peirce quincuncial can be tessellated. Several instances of the projection can be put together seamlessly. 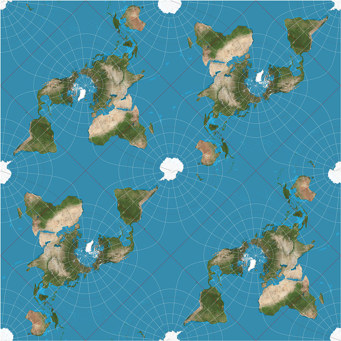 In this series, we’ve now had two aphylactic and a conformal projection. About time for an equal-area projection, isn’t it? – We’ll see one next month.

For the Peirce quincuncial image in the calendar, I used a slightly modified version of Natural Earth II with Shaded Relief, Water, and Drainages. Projected with Geocart.

Pierce Quincuncial is my favourite projection. But then again I deal with elliptic functions for my day job, and I love the concept of a world map that illustrates them by using their properties to be conformal and tileable.
Wed Apr 01, 2020 10:26 pm CEST